To say it simply, this ends with a parody of Jojo’s Bizarre Adventure, a popular manga serie by Hirohiko Araki, the drawing style becoming that of the Jojo serie, a style so unique no other mangaka on earth (except Rohan Kishibe) is using. And if you know Jojo, that kind of ending is almost boring compared to other things you’ll see in the manga

This isn’t the first time that happens, Tsunken has already given Jojo powers to some of his characters in another of his works, Love Crusaders. Try reading Jojo’s Bizarre Adventure, guys ! This is really, really special, but the longer you read it, the less you are able to stop reading, until the Stands appear, and then you’re definitely in love with that serie

Jojo is epic stuff. Kinda hard getting used to the style though.

[rant]god… WHY do people insist on the whole ancient latin american sacrifices/cruelty and stuff. It’s so fucking dumb!, the toltecs where the only ones that actually killed people in sacrifice as rituals; More people was (and is still) killed in jesus fucking christ name.[/rant]

lol all this for my last coment
i see the drawing change in the end,
did not know that was a parody

by the way
Brandish by Rusty Soul
i thik is a good h manga, i have not see in the page

Jojo’s is so f*cking loong xD I’d love to read it but 500+ chapters, uh!
But I very much enjoy Steel Ball Run, so for me this “reset” was useful.

And if you like Araki, you must also read “Under Arrest Under Jailbreak” and “The Lives of Eccentrics” by him. SO great!

I started reading it thanks to your last comment where you gave the link. It’s great

I for one think the 2nd Arc was the best, followed by the 5th, and then 3rd, really close to the 5th. Why? Not sure, I really liked the 3rd arc but I think it took longer than it should have, there were some fights that shouldn’t have been there.

The 1st was a bit crude, but still enjoyable, but the 2nd really improved a lot, having a nice feeling to it. 3rd arc is also good, it has Jotaro (and YOU KNOW WHO), which is awesome, but the setting wasn’t as good as the 2nd arc.

The 4th arc is when the story began to be more enigmatic and had more to understand, instead of it being like:

Enemy is there, we go and defeat his minions along the way and finally beat him.

Yes, I know that was a bit crude, but deep down it’s basically like that.

With the 4th things start to change, but the lack of a Super Villain, which would threaten the entire world instead of a small town really pulled it down.

Finally, the 5th arc had a story involving the MAFIA, which is great. The story had it’s twists and it was more complex than the previous arcs.

It also improved that distinct feeling that JoJo Adventures has, the way characters talk and act in such a smart, special way. It’s what makes the whole series so special.

The 6th arc, while interesting, and while having a big Super Villain and interesting plot, ended quite… well it ended while lacking something.

And about Steel Ball Run, since it’s still running I won’t talk about it but it has everything to do with the entire manga, more so with the 6th arc.

The events on the 6th arc made a reset on the whole world, so that some of the characters that appear in Steel Ball Run are the same from the 1st arc, only in an alternate story, due to what happened at the end of the 6th arc.

Of course, it was all for the sake of adding something new to the series, so that it wouldn’t get too repetitive. I think a race with body parts of YOU KNOW WHO Nº2 (not the 1st you know who, of course) is pretty interesting.

Well…I just started reading it because of this post. I agree, it’s hard getting used to that 1950’s look of the drawings. But other than that, wow. It’s a really cool, very compelling, very WEIRD manga!

can’t wait for the Stands.

Thanks for all your work on the site.

Regarding Jojo manga, I guess the TV series ‘Heros’ has a lot inspiration from it. The ways super heros use their power compare to Jojo is really like kinder garden to high school.
Brain > super powers.
You can start with his latest manga Steel Ball Run http://www.onemanga.com/JoJos_Bizarre_Adventure_-_Steel_Ball_Run/
A guy tat can throw a steel ball and a guy who can shoot ‘shots’ from fingers, huh? whats so special about it? Read it and you will be amazed.

Actually, those are his own nails that he shoots. They grow back almost instantly, yes. And, weird as it may be, it’s his stand.

And he’s also Jonathan Joestar, the main character from the 1st arc, in an alternate reality caused by the events of the 6th arc.

Of course, another character is also present. The villain we all know and… well, let’s just stay in the “know” part.

Don’t forget that Black Dog also has quite a thing for Jojo, as almost every doujin of his is named after a Stand.

I agree, the appearance of stands is what hooked me into reading the whole thing. Though I have to admit i stopped reading it for a while when it was still in the 1st arc.

Got some free times and finished the rest. When I realized, I went through the whole 500+ chapters.

Stumble across this when reading Jojo. I was loled. 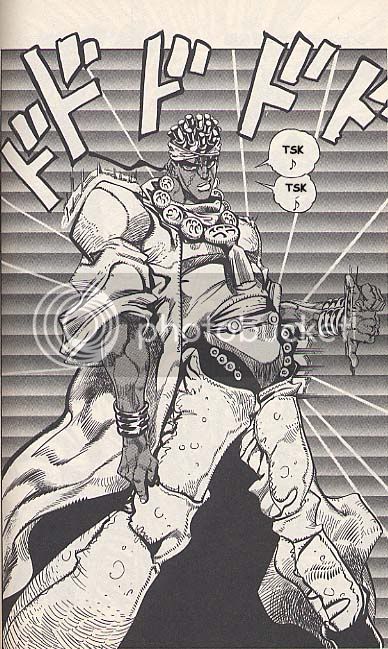 Taken from vol 19 chapter 63. Any Shiwasu no Okina fan should recognize this

Thanks a TOTAL bunch, erghiez =)