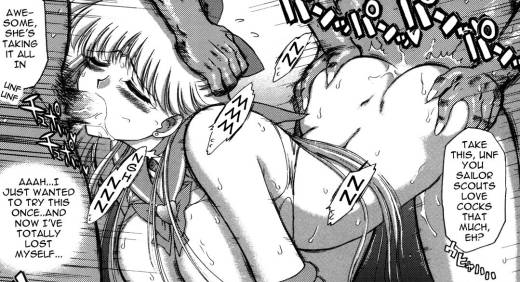 OK, I may be on my knees because of a cold, but fuck it, today is a good day, a new translated Sailor Moon work has been published, thanks a lot to Ayane ^_^

That’s the usual Black Dog stuff, I suppose it could be technically called rape, but even mutual love and consensual happy sex will very rarely look that good and enjoyed by all parts

Fast summary : Sailor Mars and Sailor Venus, 4 male partners, various combos.
The drawings are EXCELLENT, with very little censorship, the “Plus” in the title isn’t a mistake

Open the Complete Pictures Gallery (or the backup gallery)

Two quotes that I liked, as a little bonus

otsukaresama, thanks for the hard work as always ^_^

about resting, the problem is that my nose is totally suck, and I can't sleep without my nose, since childhoold it has been bitching me -_-

So, I'll wait until I fall of exhaustion, like it happens every time my nose is stuck, lol. It's no problem, this is what coffee is made for

I first bought this from Japan back in 2006 this is by far MY FAVORITE BLACK DOG DOUJINSHI OF ALL TIME! I do not regret BUYING IT.

I did a ROUGH TRANSLATION it's no where near as good as this fellow but I have NON-CENSORED version if you'd like.

I mean this has SAILOR VENUS AND SAILOR MARS TWO OF MY ALL TIME FAVORITE SAILOR SCOUTS THAT I'D LOVE TO FUCK. SIGH…………IF ONLY IN MY DREEEEEEEAMS!!!

Here's ANOTHER Translation or Interpretation of "Sex Pistols" with LESS CENSORSHIP. That I did back in 2006.

My apologies after looking at it again I forgot to DE-CENSOR the beginning I only De-Censored the end pages. Oh well, here's just another interpretation of it. Also my scan is not as good as these guys. Well done to Ayane!

Thank you for another Black Dog Sailor Moon Release.

Sorry to be a pain but I was wondering if you could batch your Black Dog releases together when i try to go to some of the older ones you've posted I keep getting sent to random sites instead of the download links.

Keep up the good work.

Great!! Now just have to wait for the new one " Grey Tower " to be translated and my Black dog collection will be complete.

2006?? I guess that's why the quality of the drawing isn't, how do you say it, "the same" as the usual Black Dog that we've seen so far except the Submission series. Nonetheless its a pretty good share =)

So, maybe a little background for this translation is in order. About the same time I got my hard copy a few weeks ago, and started scanning it, I found out Ayane had already started translating it. Unfortunately, by the time I found out about this, she was already about a dozen pages in (which for Black Dog books, that’s a LOT of editing work). I asked her to use my newer, better, awesomer scans instead, and she agreed, but didn’t want to go back and re-edit the pages she’d already done just yet…

Long story short, she will be re-editing those first few pages soon, using my scans, and then releasing the full thing again in much better quality, which you’ll be able to get from her blog (in about 2 weeks):

Also, if you’re interested in my better scans of the raws for this, or a fuckload of other Black Dog re-scans and re-edits in the future (among other things), you can check out my blog. /SHAMELESS SELF-PROMOTION

Does Black Dog just not like Usagi or somethin'?
Thanks, Oli!

Does Black Dog just not like Usagi or somethin'?
Thanks, Oli!

Any chance of updating the links for the Black Dog shares, some of them are completely out of date, even the deposit files ones for this one.

Hurp, a fast question please, I received a new black dog by email and I want to properly update the mega pack, can you VERY CLEARLY AND WITHOUT A SHRED OF A DOUBT, tell me what must be added to the back dog complete pack ?

If you even provide me either the zips to either the full pack or the elements to add, that will be cool

I reread the post a couple of times, and it seems like the only things missing are two chapters from Star Platinum, specifically Stray Cat and Black Sabbath.

I planned on going through the whole site to see what’s missing exactly, but ended up being busy this weekend with something I was LITERALLY JUST ABOUT TO SEND YOU AN EMAIL ABOUT HNNNG.

Gimme like 30 minutes, I’ll go check right now… And go read the email I’m about to hit send on.

Ugh. Literally one minute after I said that my computer locked up for 40 minutes.

…I think I might need new RAM. My computer tells that 95% of my memory is being used… And that can't be possible with only Chrome open. I have 8GB ffs. I know it was Chrome because after navigating the freezing computer for 40 minutes, I was finally able to kill the process and the computer stopped locking up and it jumped down to 21%. Opening up Firefox jumped it back up to 39% instantly tho… Hopefully I get some money for Christmas

Alright, so I downloaded your file (which took longer than I expected it to, don't forget to make the new one with 400mb size limits, otherwise people won't be able to download it from Rapidgator…)

Here's what missing: It's just Stray Cat and Black Sabbath from Star Platinum. That's it. I checked everything.
http://ul.to/z0udpg5v

I had to download this from the download links to be able to do this, as Star Platinum not on that place at all.

Also, the Star Platinum pages seem to have additional information pages that the re-releases don't. You may want to considering combining the new versions with some of the pages of the old versions. Specially considering Stray Cat and Black Sabbath are only like 6 pages long. On second thought, the whole thing is actually graphically different. I mean, the panels are completely redrawn and rewritten. So maybe it's best if you include the whole thing?

Additionally, you told me to remove the Japanese things (the Genshiken dj and flash), but you forgot to remove them yourself… So, do that.

Also, I suggest you remove the old scans for Green Day. Adds unneeded mb, I mean, ffs Oliver, it's already 1.16GB. Save the people at least 20MB man.

By the way, you have two versions of this complete pack on the youknowhat. You should remove both since you're updating this anyway. Additionally (these notes are from my long ass DOCUMENT I wrote for each redirection page – and before you or anyone else asks, yes, I have similar notes for every redirection page I've done so far):

– Black_Dog_-_Man_in_the_Mirror_ (www.hentairules.net)_(English).zip has a hyphen (“-”) instead of a comma (“,”) after the author name and before the manga’s title.

– Black_Dog,_Submission_Sailor_Stars_(english)_ (www.hentairules.net).zip is on the placethang twice. One where the “D” in “Dog” is capitalized and one where it isn’t (the “E” in “English” is not capitalized in either, despite the fact that it should be in both).