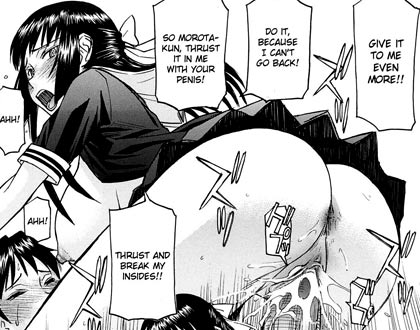 The COMPLETE version of this manga is available on THAT page

Spoiler Alert:
The two middle chapter is pretty horrible. At least the ending is happy. BTW Inomaru also draw an extra chapter for the story in this book in another book ("Camelia")

In my opinion, that's what this manga unique. First, Inomaru build the relationship between Hanahira and Morota so the readers unaware on what happens next and then BAM! RAGE! Surprising tone change from humorous to depressing. Oh well, it's happy ending anyway.

That thing you mention makes me both LOVE and HATE Inomaru. But the ending makes me less RAGE than Nagare Ippon's works.

I find it refreshing how in Inomaru's mangas, his heroins don't mind break even when raped or coerced into having sex… pretty realistic at that. Unlike Nagare Ipon's works where any guys magic cock makes the girls slave to dick. I love his art style but man… he's ruthless when it comes to NTR.

Thanks for the share, Oliver. The picture gallery of the Japanese version is greatly appreciated, too. Of course, CGRascal also deserves praise, because the guy translates about two (!) chapters a day. Which is very helpful when you are reading this series and really want to know what will happen in the next chapter. It seems your blog is removed, CGRascal, so I will just say it here: thanks for all the hard work you put in this, man.

Now about the manga. Well, actually it's more a rant about the artist. Because, you know, I am starting to like Inomaru more and more. Housou Shitsu No Triangle was very lame (that is an understatement), but he is in the proces of redeeming himself with stories that feature:

1. A mix of genres. Vanilla, netorare, hentai-rape… It's all there and strictly divided into separate chapters. So if you don't want to read the dark stuff, you could just call it quits after the vanilla chapters.
1a. Of course that does mean that you mis out on the happy endings! Yes, that's right, Inomaru actually writes netorare/h-rape stories that have a happy ending. How awesome is that?
2. Strong women. Sure, ultimately they still have sex with the bad guys, but they don't enjoy it. They only do it because they are forced, because they have no other choice. Sometimes they even get revenge by biting of the rapists balls or even killing the guy. Again: how awesome is that?
2a. This also means: no mindbreak or over the top (and rather unnerving) ahegao.
3. Great art, but that kinda speaks for itself. I mean, just look at the pictures.

I also enjoyed a lot the drawings, they’re very god, with close to zero censorship

"enjoyed a lot the drawings" sounds kinda weird to me, not specifically wrong per se, but "enjoyed the drawings a lot" seems nicer syntax wise. also, i think you meant "good" instead of "god"

It's good to have a proofreader, thanks

oh man, u shared the sweet sides of this manga, 5-6-7 actually turns this manga into a NTR mindbreak series which completely kills it for most viewers. The ending wont save people from raging that i tell you, think of this story as "When you let go of my hand"