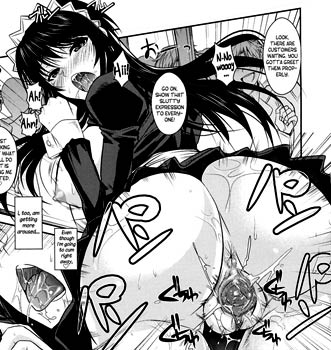 Update : There are now a whole lot more volumes of this! Get them all together here!

You should go with Team Vanilla's version of Fukuyama-san 3 – Beach Version. It's better. Totally an unbiased opinion there <.<

Big THX to everyone involved in translating, commisioning and sharing!

Fukuyama-san chapter chronology is pretty confusing for, as I get it, there are three different sources of those: Fueta Kishi's tankobones, regular H manga magazines and one chapter one volume stories he is selling on anime conventions (Comikets mostly I guess).

So the chapters so far:
1). Fukuyama-san, the opening story from Chu Berozu tanko. The one where it all started with that bra involved. I have no idea if it was released before somewhere, but Chu Berozu as a whole was published on 2009/03/19 according to Amazon.co.jp.
2). Fukuyama-san. Yep, it's called the same way as the previous work so it's really confusing, also in the Internets it's known as Chu Berozu DJ – Fukuyama-san. Plotwise that is the catch a cold story. I have no idea what this DJ is standing for, also it has no connections to Chu Berozu tanko except for the author and the fact it's a Fukuyama-san chapter. It was presented to the public on 2010/06/20 as a one chapter one volume story on some convention.
3). Fukuyama-san 2. The one about vibrator. That is the trickeries one from all of them. I have no clear idea when and where it was released, but I guess it was not on the convention for there is no colored cover and also it's pretty short, plus on the first page we can see a number 171. So some unknown H magazine would be my best bet here. The earliest date it was uploaded to the web that I was able to find is 2010/08/24, the day it appeared on E-Hentai Galleries. I have no clear idea about when it was published on paper, there is a chance it was even prior to the previous episode, but I doubt it, so I put it 3-rd on the list.
4). Fukuyama-san 2 – Kon also known as Fukuyama-san 2 – Navy Blue. The maid story. A one chapter one volume episode from Comiket 79, 2010/12/31.
5). Fukuyama-san 2 – Shima. That one is not translated so far so I don't know what the story is about. One can see Fukuyama-san with cat's ears on the third page. A one chapter one volume released on Comiket 79, 2010/12/31, just as the previous work. So with this two chapters there is no way to tell what story follows what chronologically.
6). Fukuyama-san 3 – I'm Going to the Beach also known as Fukuyama-san 3 – Take Me to the Sea. The one about going to the beach/taking your beloved to the sea =). One chapter one volume episode released on Comiket 80, 2011/08/14.
7). Fukuyama-san 3 – Daifunka. No translation available so far so I don't know what it's about. One can see a jRPG theme on the third page. Just as the previous volume, it was released as a one chapter one volume story on Comiket 80, 2011/08/14.

And there ya have it, folks. I guess I'll include this in my post when the next Fukuyama-san doujin comes out. Oh, and I've received word of a non-h one-shot featuring Fukuyama-san too.

And thanks for explaining the timeline, Afro, i was a bit confused about Fukuyama-san 2.
And wow Afro, now you have a personal blog ? Really, congratulations and thanks for recovering Nemui's projects and for others…you're great.

If you ask me, I think he's just splitting hairs.

this series is just tooo goood!!!!!