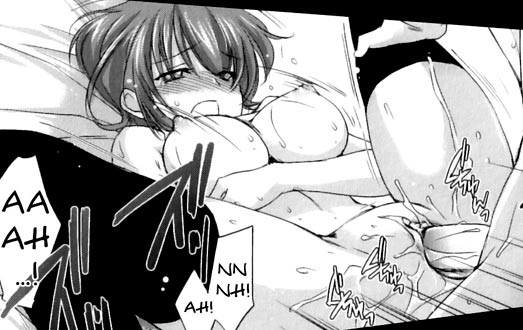 On a sort of distant-but-not-so-distant magical world, the young prince spends his time fucking maids, so his father exiles him to Earth to make him learn the value of women’s love. (Don’t blame me, blame the scenario

).
The chapter 1 shows two maids, and then a first human girl, having their day with the prince, it’s simple as that

The drawings are great, the Earth-woman is a totally fappable-to babe. Besides, how can she dress like THAT and be a virgin ? Isn’t Japan full with rapists and tentacle monsters ?!?

(In short, this note was telling that the male hero’s king of a father totally resembled the father of the magical girl known as Minky Momo in Japan, one of my younger days’ classics. At zero minutes 35 seconds of that video, it is obvious, lol)

My great thanks for the translation are for Biribiri, Afro Thunda and Job Truniht, and also Tenchi20 from HentaiKnight who scanned the manga

–Update: this post has become obsolete. The complete Pipiruma manga has now been released, to get it, please simply follow that link

The kids dammit the kids……smh

On unrelated note, apparently Shindo L just working on a H-game, you can check it here…
http://erogedownload.com/downloads/captive-market…

Note : Does I violate any rule when posting this link?

Between bitshare.com always “The file owner decided to limit file’s access. Only Premium members can access this file.”, filehost.ws regular “Download limit for this file has been reached.”, depositfiles.com often breaking downloads (stopping for no reason), it leaves rapidgator (when you quickly enter the protection words, otherwise it’s 15min wait time).

I wonder which one is the worst free provider ^^

It's strange, bitshare isn't showing that error message to me. Meh, guess I'll give up on that one

Try logging out or using a different browser.

I don't seem to be having any troubles with Filehost.ws, so I dunno what he's talking about. Maybe he needs to be logged in for it to work?

Thanks for the plug, Oliver, and also for pointing out the Minky Momo connection. It's a famous show and one of the undisputed classics of the magical girl genre, but I haven't seen it and thus wouldn't have spotted the reference. Biri did a fantastic work with this release as you can see if you compare the stitched-together double pages with the originals. Special mention goes to T. Starrk who braved his titty-allergy to proofread the chapter.

My long-term goal is to get pretty much all of Yuuki Homura's newer works that don't feature freaky lizard-men translated. Once Pipiruma's funding is covered, expect to see some translated Love Poro Style.

Admin
Oliver (AKA the Admin)

Hehehe, replying to a seven year old comment to tell: SOMETHING NEW BY YUUKI HOMURA IS ARRIVING AGAIN

Huh…didnt expect you to share this…you know…considering one later chapter touching on a subject that you're not a fan of..

Besides, how can she dress like THAT and be a virgin ? Isn’t Japan full with rapists and tentacle monsters ?!?. Loved that quote Oliver haha.

GOOD DAY.
Sorry for the delay, i am coming back from vacancy .
The author is (or was?) really a fan of the old serie gigi; same for me when i was a teenager .
Thanks for the post .

The author is (or was?) really a fan of the old serie gigi; same for me when i was a teenager .

Fakku has up to 7 chapters of this already in english i think a complete volume be sure to check it out -.-

Nope. Tank isn't done yet. Still got a chapter left and the afterwards left.

I know since I helped with it. Also, two chapters (4 and

I found the complete version y'all posted here:
http://www.hentairules.net/2014/01/04/pipiruma-en…