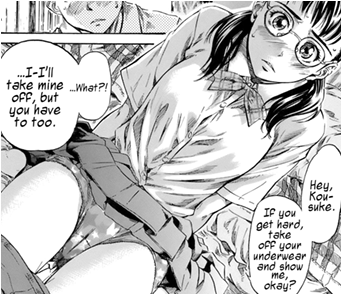 Update : This is now released with a more complete version that has better editing!

"(Note: No where on the Internet labels this as lolicon, not even Japanese websites selling the manga online. So I think it’s safe to say it’s not actually lolicon, the drawings just kind of, well, look like it.)"

Oliver is such a fucking retard sometimes it just blows my mind.

I guess it depends. Do you define lolicon as under 13~14? Or any girl that's underaged?

How the fuck is this loli?! Seriously. But if you mean chapter 6 until last chapter, then yes it's loli (chapter 5 is just pettanko/DFC though).

isn't any person under 18 technically underage (if you're going by law) which means all the high school stuff falls into that category.

Or do we have some new standard? under 15? under 13? or does it just go by whether or not the female is lacking the notable body parts?

"Underage" varies wildly depending on where one is from. In Japan the default age of consent is 13, with regional laws that may up it to 18 in some places. In the US, states set their own with most common age of consent actually being 16, not 18. The UK is 16, Germany is 14, and France is 15. 18 is not a worldwide magic number.

Age of consent isn't the same as no longer being underage. I believe you're confusing "consent" with "majority" (commonly called "legal age", which is what I was referring to). That's (mostly) 18 in the US and 20 in Japan.

So, yes, all high school mangas are underage (by Japanese laws).

maruta got to have a particular set of preference

HurpDurp, how do you alt-text your links? I may have uses for that sort of thing…

It's one of the features of Wordpress, you enter it in the "title" box when adding a URL.

Additionally, you can just make it yourself with html using alt="text" and title="text" attributes inside of a href tag. (You need both or it won't show up on every browser.)

No one's noticed it yet, but (second time it's mentioned) the word "myself" in the credits is also alt-text'd.

First, thak you for your work and…
Second, it seems that the link for the previous chapters doesn't work, even if I'm correcting the miswritten address (a 'c' for a point) : http://www.hentairules.net/2012/08/26/shape-of-your-favorite-girl-chapters-1-and-2-english-uncensored-by-maruta/
Third, I'm usually really discreet but since I'm actually writing 'out loud' right now : HurpDurp, for what it worths, you have all my sympathy in your hard time.

>Second, it seems that the link for the previous chapters doesn't work, even if I'm correcting the miswritten address (a 'c' for a point) :

The fuck? How'd that happen?

Just a wild idea, what if you try with another browser that doesn't have the hentairules cookies ?

No, it was actually there. I've already fixed it. I just dunno where the hell it came from.

If there's a bug, I'm the one that'll be the most interested.

Thanks for fixing it Hurp, but please, do tell me more, what it was precisely

There was a "c" between "rules" and "net" instead of a period. I'm not sure how to explain it better than that.