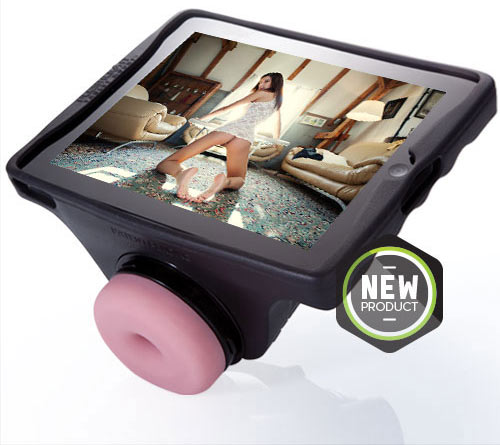 So guess what ? Here’s the gadget to pornify your tablet. TAKE THAT STEVE JOBS !

I saw the first pics five days ago, and during 2 days I believed it was a total hoax. A good one. But a hoax.
Turns out I was wrong : it exists, lol ^______^
(the name’s the Fleshlight Launchpad. You attach it to an ipad, place a fleshlight, and, well, I beg you don’t ask me draw you a picture.)

I wonder, what will be the next technological gadget that will be ridiculously hilarious, and that I won’t have seen coming at all ? ^^ Maybe one of those Japanese electrically-powered super-tengas, that could also be coupled with a tablet… or, hey, that could be synchronzized with a 4K screen, with a program managing video effects matching the impacts on the tenga device…. Brrr, now, this is making me shudder…
PS : imagine, in a few years, combined with an Oculus Rift… Oh wait, that won’t happen, OR has been bought by Facebook, a company also applying an anti-porn moralfag policy. Bummer

«The most badass fighting quote in a long time, to you, fappers !
Two questions, about a metal song, and a Linux server configuration :)»

Now, you can use both hands while fapping. Multitasking FTW!

It's too late they have already done eroge on oculus rift
http://visualnovelaer.fuwanovel.org/2013/07/custo…

"Only Apple-Macintosh is God and Steve Jobs is His prophet."

It is rare to see someone not consecrating a man whose great contribution to the world was to sell by the triple price what had already been invented. It must be the most dogmatic of all creeds on Earth, with people selling the own kidney the buy the dispensable iPad (as it happened in China), while there are better devices costing 30% and having lots of free programs. And the guy was transformed in a god.

I call it the fablet!

You deserve a crown for that line. A crown.

Chick reminds me of Caprice.

Suddenly I'm thinking of re-watching (in no specific order) "Johnny Mnemonic" and "The Matrix". :|

In need a Samsung Galaxy / Tenga version, bonus if it has auto-fap features and settings. For science.

The Apple hoards would not like your comments. Prepare your walls, hardend your shields. They march

I'm waiting for them. BRING IT ON PUSSIES, ENEMIES OF THE ENVIRONMENT ! I FAP WHILE YOU BUY !

How dare you? Against Mighty-Army-of-Apple-Sheep? We are not enemies of the environment, we're just a cult that makes people addicted to new expensive iGadgets and make you bound to it under the mighty silver apple logo

we will bombard your walls with scams, ads and comments related to the apple products
PREPARE FOR OUR STRIKEEE!!!

We could make a trebuchet that flings these at the Apple hoards!

ARGH NO PLEASE STOP THROWING AT ME CHEAP GADGETS THAT COST LESS THAN THIRTY BUCKS !
I AM ALLERGIC TO CHEAP ELECTRONIC DEVICES ! NOOOOOOOOOOOOOO~~~~~~~~

I'm probably going to catch hell for saying this, But the fact that this has actually been invented is just sad.

I sure hope you're wrong, are you seriously saying it's possible to « catch hell », like you catch a cold ?

I can certainly see how this device might synergise with POV, if that particular genre happens to tickle your fancy.

does it like do inside self motion? or do you have to move it up and down..(this could cause motion sickness lol)

Damn this is something O__O

For all the complaints about "Apple Hordes", the message here is uniformly bashing Apple and their customers? I have to day this isn't uncommon. Mac users get just as much "ours is the right way" from PC users as PC users get from Apple users.

As to Jobs, I wouldn't recommend that people try and be like him personally, and one can try and spin what constitute "new" in technology, but he did bring to market things that nobody else was bringing to market and made new things available for the consumer.

Which led to yet-again increased consumption of non-renewable goods and the aggravated almost religious belief that consumerism remains morally right. We might, you know, lack these resources in less than half a century, not for toys lasting less than half a decade, but for preserving western civilization from collapse, maybe even for survival, but who cares, right ?

Do you really believe he was that powerful? Don't look at him as a messiah. Apple Corp had (and still has) hundreds of engineers and programmers, and just one man to announce the products, but people looked at him as if looking to a god.