I don’t know if you’ve noticed (more likely : who managed to escape the hype ^^), the trailer for the next Star Wars movie has been released.

Well, I just wanted to share two early parodies that came shortly later, I found them funny as hell ^^ 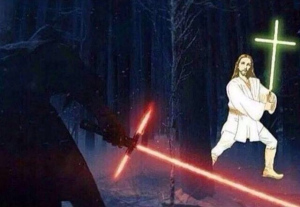 «A friendly mention about Steven_Even :)
Technical help with a directory search issue, please ?»

I DID manage to miss it! Thanks for this.

Boy, if they were milking the drama any harder, their hand would be in Drama's pants! LOL

Actually, nope, Hinoron, there's a whole universe to explore, from the books, and many of them are SOLID.

Now that Spielberg has given in and conceded three more episodes, now that Disney has accepted to betray the original intentions and spray an open number of sequels, we're now in the extended Star Wars universe. And it may mean good, actually

… I get the impression you interpreted my comment differently than I intended it.

I just meant the trailer was made extremely dramatic, what with the deep, breathy voice of the narrator, all the black screen breaks with sudden "blinks" of scenes. Dark screen closer with just the familiar sound effect of a light-saber extending… Some would call that over-the-top dramatic. I'm not aware of any pre-determined lines of how much is "too much" but I still find it amusing. xD

Even in the void of space they were making their characteristic noise. Weren't they ALWAYS surrounded by some sort of magically added atmosphere ?

Welcome to the land of STAR WARS!!! BITCHES!!!:D

….as trailers go…nothing there?? They showed practically nothing!

So what you're saying is that you're frustrated and want to see more?

Trailer worked perfectly then, didn't it?

Yeah, that's right. Just saying that it's one of the biggest teasers I've seen to date

So it IS a real movie coming?!

I seriously thought it was some fanboys wet dream and he made a fake trailer.

If there's a fanboy out there who can make a trailer of this quality, including all the effects and props and scenes that are clearly not from any of the previous episodes, then that hypothetical fanboy is so capable he may as well make an Ep VII for real!

He might even be able to write a better script. I hate that punk-ass (add 6-7 more insults here) wannabe of a *hero* Anakin.

since i missed it indeed, i thought i was fan made.
BUT
To much expensive props shown in very short time.
Fan trailers would be more proud of their props and give 'em more screen time.

Now that this thing has been released, I bet those fuckers at Disney must be enjoying the cries of happiness and outrage of fans everywhere. So far I see the following:
1 Nigga Storm-trooper (no pun nor discrimination intended), 1 cute bitch on a HDD speeder bike, 1 Rebel/New Republican X-wing pilot (so far the new X-wing looks promising, but the flight suit needs a little better work), 1 freaking football of an astromech droid, which I suspect that these brats are the successors of R2-D2, Luke, Han and Leia in this trilogy.
A sith wannabe with a red light-claymore (what did JJ Abrams/Disney smoked when they made this?
New stormie armor design, finally!
And The Millennium Falcon, now with a rectangular antenna (Lando must've bought it in the aftermath of Endor)
So far, part of me wants Episode 7-9 but i don't want disney to be involved in it (ZERO percent!) Not even being the IP owner of lucasarts/lucasfilm. If I decide to watch it, I'LL DOWNLOADED BITCHES!! NO MONEY FOR GREEDY JEW-WOOD HOLLY-TRASH!

Honestly, I don't see Disney fucking it up more than Lucas himself did.

After having your limbs cut off : "I HATE YOU!!" Really, just that?