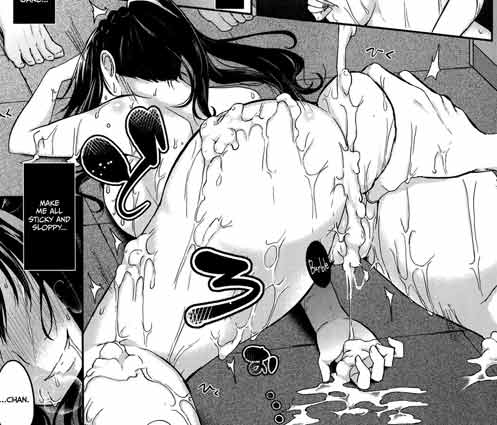 That girl is taking the “eat me!” idea a bit too litterally ^^ In short, this share’s heroine has a fetish on people eating the pastry she cooked, for her it feels as she’s banged while boys feast on her cakes. Eventually, a boy gets intimate with her, and then it’s time for sex with the same cooking fetish.
I skipped the part where the boys pours cream on his dick and only kept the good parts in my memory ^^;; I wish I could also forget the blur-mosaics censorship from hell, argh, but no can do.

–Update: this post is now obsolete, this chapter now belongs in Fumajimeni Uraraka

Similar to the "HentaiBurger" from Tachibana Omina's "Boy Meets Harem":

Gallery only contains one pic.

ah my bad, its just changed.

I didn’t change the gallery at all, was it showing you only one picture, really ?!?

Ah, no, wait, I think I see the problem. I made a mistake and uploaded the gallery as a sub-gallery. See the idea ? First you open the gallery, it only shows one picture, which leads to the real whole gallery!

My mistake, I'll update the link to open the sub-gallery at once.

Somebody UNCENSOR this! >:D

Barako, this would require to be able to FULLY redrawn, from scratch, male and female genitalia. This is almost an impossible task, so I believe you should, sadly, give up on that dream

New artist for me! So many ooze XD

Vanilla enough? Or too chocolate?

Piece of ass, piece of cake.

Either way it's satisfying for the ravenous.