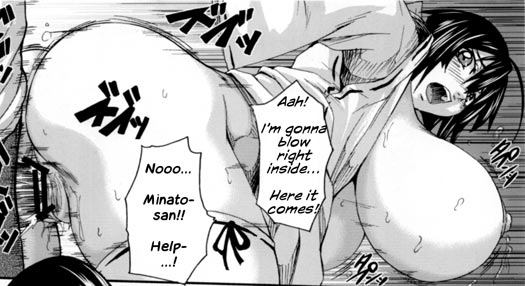 I gathered here two works by the mangaka Piero, one of them is brand new, the other was in my Downloads folder although I have no recollection of downloading it at some point.

Those two works are:
– Chichiana: that one was seriously cute, amusing, and, actually, well written

It’s a shotacon story (fair warning), about a boy reaching “that age”, still intimate (but not sexually) with his aunt, who discovers with that aunt about the things of sex. He is honest, but candid, making beginner mistakes, showing earnest interest in learning how non-fantasized female anatomy works… that was fun to read, I found myself cheering for the boy ^^
Just one warning, though, there’s this absolutely WEIRD fetish: nipple fucking O_o
– Musubi-tan Dai Pinch: a Sekirei hentai doujinshi, one of the hyper busty girls has paizuri and vaginal sex, occasionally showing killer abs. I once saw Sekirei geniously described as “Pokemon with waifus instead of animals”, is that accurate ?

It is no way related to pokemon. Shame on whoever said that.

Really ? The way I’ve seen it described, you seduce human-looking creatures with super fighting abilities, and you have duels with other masters, to be the strongest in your area, or something like that ^^;;

yea thats pretty much it. Except the duels are to the death, and nobody has a choice in the matter cuz a mad genius has control of the city,

You’re not wrong, but it’s kinda off. It’s only 108 chicks, and a handful of ‘masters’. They make a contract with those masters through a kiss, and usually one who they feel like is their ‘chosen’ master. They make hints that it can be forced, but I have no recollection of that ever happening in the series. After all 108 are ‘winged’ they have a free-for-all and the last master and servant standing get to have a wished grant. Of course it’s a lot more complicated, but this is good enough of a description with no spoilers. I wholly recommend it, it’s a good read. Also, you should definitely check this one out Oliver, it’s really good:
http://bato.to/comic/_/comics/amano-megumi-wa-suki-darake-r18221
I love this one. Only 3 chapters translated, but I loved it from the first chapter. Chapter 1, page 16 OMG I laughed so hard the first time.

Oddly, I haven’t had alchemy with that one. I feel the mangaka is trying too hard, super hard, LOOK HERE IS MORE ECCHI I WILL STUFF IT IN YOUR FACE UNTIL YOU LAUGH UUUUUUUGH WHY DONT YOU LAUGH WAIT HERE TAKE MORE ECCCHIIIIIII

That’s not a very rational description, but, oddly, that’s how I feel. Not touched, not made to laugh O_o