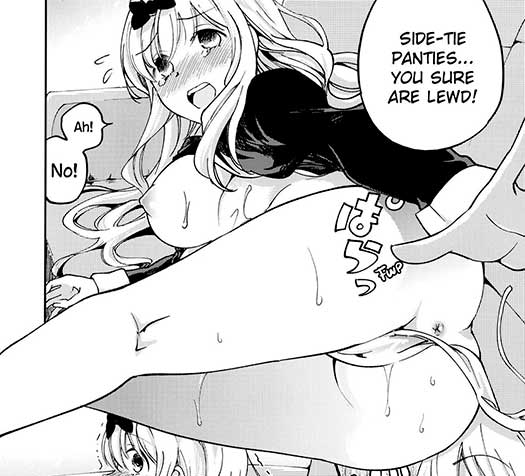 Looks like Kaguya-sama wa Kokurasetai (“Love Is War”) is a relatively recent manga series, it started in the end of 2016, and “only” sold a million copies a year later. A nice figure, but still not the “hyperpopular comet” type. Wikipedia has little to say about it, but I’ll mention you can read its scanlation here, for instance, plenty of chapters are available. I read a dozen or so of them, their art is poor but the rom-com story was amusing, two highschoolers clearly into each other but they don’t want to “admit defeat” by confessing first, so they resort to all silly plots and schemes to push the other into doing it first

Now, this doujinshi. The female MC is a huge airhead, she’s Fujiwara-san, one of the manga’s secondary characters. In the first volume, she has comedy and then worries-free sex with the manga’s male MC, the student council president. The second volume is nothing alike, this time Fujiwara is hypnotized and raped by an incubus looking like a shota who plans to impregnate her, wtf

The drawings (with vaginal action only) are rather good, better than the first dozen chapters (I didn’t read more yet) of the original manga, huhu ^^ Also, there isn’t too much censorship, not too thick black bars is the best one can hope for nowadays.
Enjoy, maybe? Thanks to DrunkenWeeb for this release