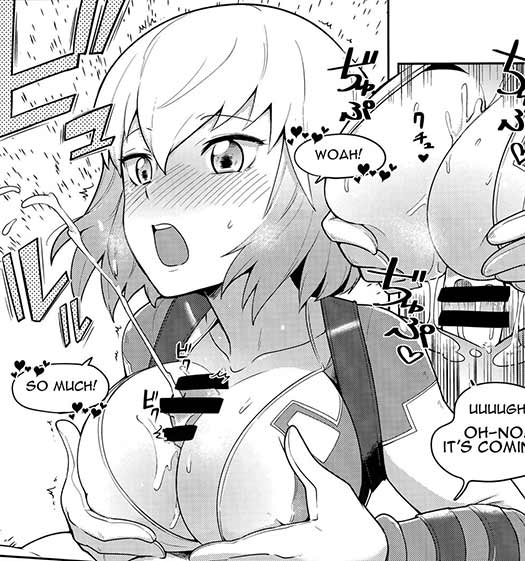 Oooookay. I didn’t know, but it’s an official comics thing (look, you can read it here), there’s this weird US comic books creation, a comics nerd transported into one of the alternate Earths in which the Marvel comics happen, and joining the superhero ranks, all the while being 100% aware she’s in a comic. A sort of female version of Deadpool, minus the rotting body skin and actual mercenary skills, introduciiiiiing: Gwenpool, AKA Gwen Stacy.

The story was weird and funny, the drawings were good enough, so let’s just enjoy, shall we? Thanks to whoever is behind this release!

The occasional rant about excessive file sizes: I downloaded it myself as a HUGE 192 MB archive, made of images over 6000 pixels high. I didn’t even pretend to ask myself if there were people out there with monitors of that size, so I took the liberty of resizing the images to 3000 px high, the common current standard for high res (and, once again, I won’t even pretend to ask myself if there are people with 3000 px monitors either.) Long story short, we went from 192 MB to 40 MB: much better in my eyes.

Gwen Poole actually is a “real” person that got transported into the the world of Marvel comics and originally her powers was pretty much knowing everything since she was a big Marvel nerd but as the story progresses she finds out she has plot armor and pretty much a literally god in sense with her being able to see the 4th wall and manipulate it. Comicstorian has a good series about Gwen Poole.

One very funny bit about Gwenpools is that she actually can see the phylacteria (speech balloons). Everybody else’s speech balloons are usually white with black fonts, save for the occasional “special effects” (demonic being speaking in white-on-black with dripping fonts, etc) while hers are… pink. If anybody else than her has pink speech balloons, she marks them immediately as being from the “real world” just like her

Her pink costume’s origin is also rather funny. Like all superhero wannabe’s, she got her outfit from a certain shop. Since the shop owner couldn’t be arsed, she used a big roll of pink material to sew that outfit. It was way better in the sense that nobody wants that pink and it was a good chance for her to get rid of some of that stuff. Gwen’s basically dressed up in refuse material

Thumbs up to the Freddie Mercury (stache version) pic in her room.

This made me chuckle a little.

Oliver, Kotau is the circle name for Bowieknife (strange that you use the former in the title but only the latter in the description), from whom you’ve already shared an Idolmaster doujinshi back in 2016: https://www.hentairules.net/2016/02/22/yui-pero-english-an-hentai-doujinshi-parodying-the-idolmster-series-by-bowieknife/

I’m actually picking this comic up, thanks to you, Oliver. However, I gotta tell you, this is NOT Gwen Stacy. She is, in fact, Gwen Poole. It’s in the link you posted, I would not lie. In fact, she later meets Spider-Woman aka Spider-Gwen aka Gwen Stacy, so there you go. This posting? Not so bad!