By Oliver (AKA the Admin) 5 on August 9, 2019
in Categories: Complete English Mangas, English Translated, Original Manga 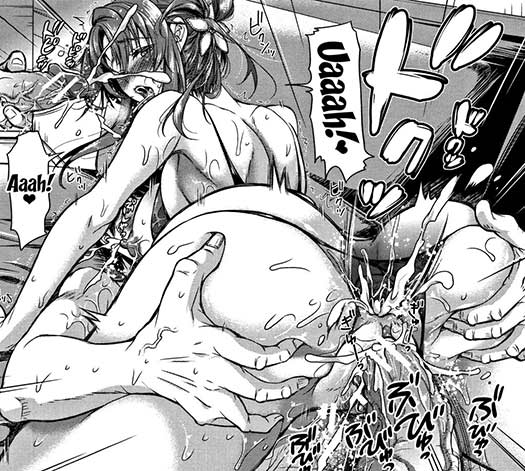 I was *slightly* disappointed by the first half of the manga, when it was released last year under the Tane No Nai Hachi (“A Seedless Flowerpot”) name (to quote my own lines: “for fuck’s sake, that was such a bore to read, I’m glad this is over“). And now, half a year later, the rest of the manga has been scanlated: a small arc and single chapters, all of them based on the same “dumb cheating” theme.

Strong warning, the manga caters to the audience who loves watching a male MC cucked hard, and who (probably: just my guess) enjoys watching a woman in a position of moral inferiority because she’s fucking dumb and a slave to her vagina’s needs.
The main arc is about a man and his wife, presented as hopeless idiots who ignore how sperm donation works. “Naturally”, his wife will be gradually stolen by an alpha male, and the other woman to whom the husband starts feeling attached is stolen back (and even better, he is “used” in the process to unlock the achievement.)
The rest of the chapters are of the same inspiration, save two in which the husband is simply absent.

I sighed more times than I wish to count, but I’ll give you that, the drawings are solid. Hardcore, deliciously crude, with fine, fine asses, the women have plenty of meat (almost Rubens style: here’s an example, “The Three Graces“), save the occasional ahegaos this is excellently drawn.

By the same artist, I also share Yokumakezuma No Sukebegao (214 pictures.)

Smaller version incoming!
As of usual when ☑ the images are in high enough resolution and ☑ the archive is quite big for its number of pictures, and ☑ it offers a significant gain, and ☑ I have enough time to do it, if it may help, I’m offering you a smaller version, in which I resized the images, here from 3000 px to lower-standard 1600 px resolution.
The zip shrank from 771 MB to 119 MB.
Personally, I prefer it for reading, and it takes less disk space.
Download links, Zip: Mirror #1 – or – Mirror #2 – or – Mirror #3 – or – Mirror #4

Yeah, I was wondering at first if I was suffering from a Mandela Effect when I saw the “new title” of what was posted that I’ve read before!

Sex is a mess, plot not much better.

Are turkey basters prohibitively expensive in this story?

Another thing that didn’t make sense was why the cuck had to wear a condom, it’s not like his Johnson was infected with anything and he shot blanks.

Probably like the final humiliation for him. But, yeah, it was bs

While it is not my favorite genre, i always like a well told netorare story. But i hate how most stories nowadays involve either an MC so motherfuckingly passive he might as well be a fucking clay pot in the corner, or women so astoundingly dumb that they make moss look like a quantum-physics PhD holder in comparison (or both, in this case)

Yeah, I can also accept well written netorare. To me, it’s like a tabletop RPG you play with the mangaka in the game master’s seat, and you don’t know what role he will play, passive or active, ally or betrayer. Doesn’t matter how the scenario turns, if it’s well done you’re glad you took part in the game.