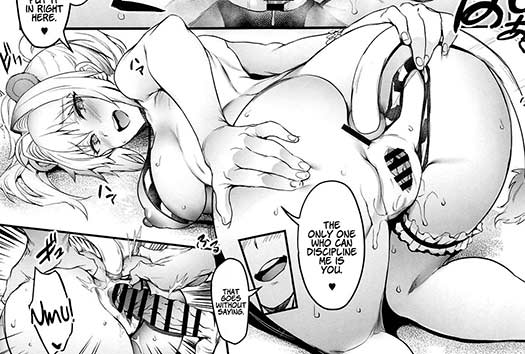 Nero accepts to wear the swimsuit recommended by her Gudao, and full of pride, she displays her sexy body, hardly hidden by a nanobikini, in front of everyone, boasting of how good she looks basking in their (in her eyes: deserved) attention. I haven’t yet mentioned the cute lioness ears hairband, and also, yeah, the lioness tail, attached with a butt plug, have I?

Just as Nero eventually understands she’s ridiculing herself (another F/GO character made her realize, just like in the old tale), her gudao steps in, and demonstrates her exhib sex is best sex, that was all a keikaku to introduce her to a new world of thrills, etcetera =)

There’s plenty more for you on The list of Puyocha’s works on Hentairules!

Just in case you’re annoyed two pictures exist as duplicates: deal with it

OK, OK, an explanation.
I was saddened the cover only existed in small 1200 px resolution, so, as of usual in such cases, I searched the internet to see if I couldn’t find a better replacement image. I failed, that’s as big as the image exists (excluding the visibly enlarged images based upon the same original small size file, that don’t look so good).
However, I stumbled upon a Pixiv account with an almost identical cover image, but with a tiiiiiny bit better colour balance in my eyes, and on top of all, devoid of compression artifacts (like when you save the image with a badly chosen compression ratio aiming to produce a too small file, at the cost of image quality), so I added that one in the beginning.
And there was also a smaller resolution version of another image, the Nero character profile image in the end, 1200 px instead of 1692 px, but with overwhelmingly better image quality, so I also added that one. 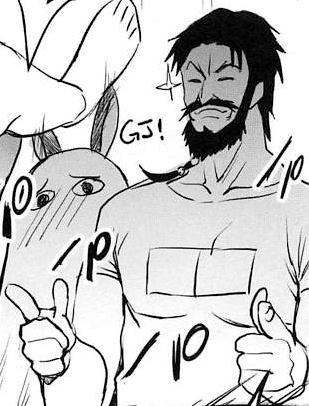 «Kuro Gal-chan To Megane-kun [English], by Fumihiko
Tsukushi Tsuma No NTR Jijou (“My Wife’s NTR Circumstances”) [English], by Aka Seiryuu»

i’ll admit, that swimsuit got me heated up faster than a stroll at the surface of the sun. DANG that initial shot of her backless before the tail reveal had me grinning like an idiot as i immediately figured ”how” the smiwsuit was held….

on another note i now have tendinitis….

This is a parody of another work, but feels like a satire about public nudity, censorship, and prudishness as well.

The dude’s dick had the bar censorship, but all it was, was a striped dick, not a badly censored dick, but a cleverly striped one. It looked like it matched her swimsuit. Like a striped condom/speedo.

Anyhow, just thinking she would have been better off just painting on a swimsuit or going nude, but made a mockery of public nudity law.