By Oliver (AKA the Admin) 5 on September 15, 2019
in Categories: Doujinshi (Parodies), English Translated 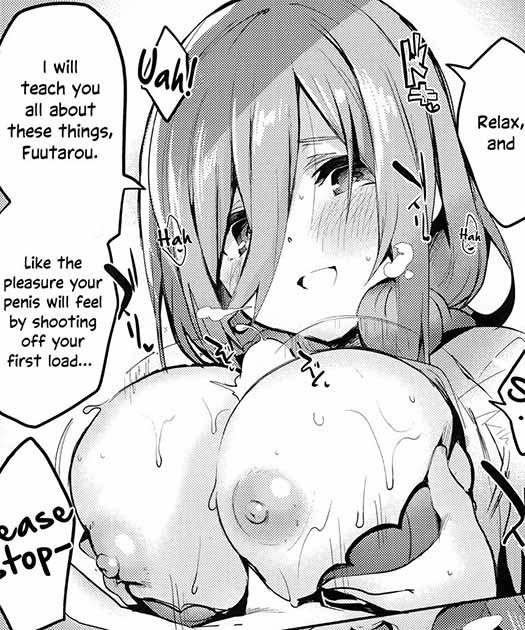 Here’s my typical warning, I never read or watched Go-tōbun no hanayome, The Quintessential Quintuplets, all I know of it comes from a hurried Wikipedia perusing, basically that it’s yet another rom-com ^^
So, sorry if I’m missing important details, but please see this as a chance to tell me in the comments if it’s a series that absolutely rocks and would deserve to be discovered

The sex is drawn with talent and intensity, however some evil demon from hell (no doubt) has painted Fuutarou’s dick white, just as Miku’s vagina, an unforgivable misdeed *cough*, so I’m not sure everyone will still enjoy the read, it’s your call from there on!

One simply does not know go-toubun (or something these line), but seriously it’s a good manga worth reading, try you might like it.

I saw one set of boobs when there was the potential for four identical pairs to join in.

Not particularly familiar with this one, so will have to do *koff-koff* “research” … primarily to see whether like Narayuki (“We Never Learn” {Bokutachi wa Benkyou ga Dekinai” series) Fuutarou deserves the so-called “harem” end.

Go-Tōbun no Hanayome, aka The Quintessential Quintuplets, is a great manga and an above average anime (The anime doesn’t have enough budget to do full justice to the manga’s artwork). Yes, this is a rom-com, but more than anything else it is a mystery. Not only that, the harem rom-com aspects are unique:

We open with the MC on his wedding day thinking back to the day he met his bride…his beautiful, clearly in love with him, very happy bride. So, to state the obvious, this is a property where the MC actually makes a choice. And on that first day? Our MC is an impoverished, anti-social, superstar student who’s just been hired to tutor a new student at his school, for 5 times the going rate, a new student he’s offended. His efforts to apologize with his future employer run into trouble to the girl having 4 friends who are accidently running interference. He’s only able to apologize when he reaches the girl’s luxury apartment home to discover that the other girls aren’t her friends:

And his job is to tutor them all, with the Quints all being horrible students. From there, the story takes off as we see the interactions with all 6 of them being the focus. Where most rom-coms focus on the interactions between the MC and a particular harem member, here we never are allowed to forget that each of these harem members is an identical sister of all the other harem members, with the closeness that implies. Through this process, we see the genuine love the sisters have for each other.

Above all this is a mystery, and a pretty good one, as the mangaka has set up each girl as being “best girl”, with events seen in the past often having new layers as the story continues to unfold. Events that took place 50 or more chapters ago (ch. 102 should be out within the next 24 hours) can suddenly have new meaning as revelations occur.

The Quints are, from oldest to youngest:
Ichika -older sister type.
Nino – Fashion plate, doesn’t want outsiders interfering with the relationship the Quints have.
Miku – The quiet one.
Yotsuba – The genki, friendly girl, always helping others and athletic.
Itsuki – The serious sister, tends to act like the mother of the group, or as one of her sisters says, act like an honor student.

The most popular Quint in polls, by far, is Miku, the star of this story. It’s not the worst characterization I’ve ever seen, but the Miku here is too aggressive to be convincing as Miku.

In case you’re wondering, the hair coloring differences of the Quints are to help the readers/viewers keep track of the girls.

I highly recommend this property. It was not the best anime of it’s season, or even the best rom-com (“Kaguya Wants to Be Confessed To/Kaguya-sama: Love is War” took that honor), but the unique interactions between the harem, each other and the MC made this a truly outstanding property.

Very interesting, very informative, but you aren’t answering the question about the story that EVERYONE compares this to: is it better than We Never Learn (Bokutachi Wa Benkyou Ga Dekinai)?