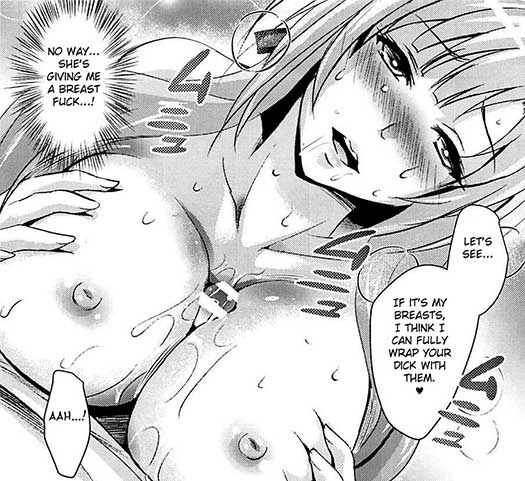 I didn’t know of this series before, this is, for me, the weirdest isekai title so far: “Do You Love Your Mom and Her Two-Hit Multi-Target Attacks“, in Japanese Hepburn “Tsūjou Kōgeki ga Zentai Kōgeki de ni Kai Kōgeki no Okā-san wa Suki Desuka?“. Wikipedia makes it look like a goofy original story, maybe that’s a good read, who knows ^^

As always with Studio Big-X, the art is a true pleasure to behold, sensible, artful, done with tons of skill, and it’s not *too* censored (white bars).
Enjoy! ^^ And thanks a lot to Fated Circle, who was commissioned by a kind Anonymous

To be honest, I read like 2 chap. of manga, and give up.
But you can try “Bouken ni, Tsuitekonaide Okaasan!: Chouka Hogo na Saikyou Dragon ni Sodaterareta Musuko, Hahaoya Douhan de Boukensha ni Naru” 🤣, nice and “short” title 😉 😂.

They’re not “thrown against their will into an RPG-like other world”, they’re playing an actual VRMMORPG in the vein of Sword Art Online… one that’s apparently still in the beta stage, according to the female government official that presents the MC with the chance to go there (presumably for testing), WITHOUT telling him that she’s also sending his mom with him (he specifically wanted to get away from her for a while).

Ahem. It’s actually a MMMMMORPG: “Mom’s Massively Maternal Multiplayer Making-up-with Offspring Role Playing Game.” It’s kind of a silly story. Actually, it’s a REALLY silly story. Every mom gets a game-breakingly overpowered attack. Their child, who’s hoping for a fun Isekai adventure, generally gets massively embarrassed by their parent. And yeah, his Smother really is such a doting and wacky oddball that this isn’t THAT much of a stretch. It’s actually SUPPOSED to be a parody of incest light novel Isekai, which I guess makes this a parody of a parody?

damn, now i HAVE to go read it!

Helicopter parenting now invades the otaku-verse, got it. Scared now, but got it.

Now a bit of useless trivia is that the author for “Tsūjou Kōgeki ga Zentai Kōgeki de ni Kai Kōgeki no Okā-san wa Suki Desuka?” is none other than the one responsible for https://www.hentairules.net/2016/10/10/ane-naru-mono-pack-121-pictures-english-by-pochi-goya/ series =D

Oh, one more trivia is that this serie is airing in the currently animes season.

Oh, you’re going to love this: The anime is winding down to the last episode (of the season? Of the series?) So let me give a bit of a series summary, including some of the great info already provided: Our MC, Masato, fills out a weird survey, when along comes a government official who sends him into a video game world…without telling him that his Mom, Mamako (yes, that really is her name) is also coming. Or that he’s entered a MMMMMORPG: “Mom’s Massively Maternal Multiplayer Making-up-with Offspring Role Playing Game.”

So, yes, everyone enters with their Moms in tow…except all the Mom’s get massively OPed powers, including Mamako. After a series of events, Right now, Ma-kun, as his Mom calls him, has assembled a nice little harem, er, party, with the help of his legendarily OPed Mom. And the Game Masters have been using them to solve various problems in game, including the latest arc, a town with a massive tower dungeon where someone has been stealing all the sons (and daughters?) of in game mothers.

The ditzy leader of these rebels send a group of henchmen to take out Mamako and the gang…with the leader of the these rough guys being named Pochi!!!

Who first forces Mamako to feed them, making them nostalgic for their mothers…but then Pochi gets serious, lies down on a bed and orders a maid-dressed Mamako to give him bed service!! Result?

Mamako tucks him in and tenderly shushes him to sleep, and then does the same for the other two thugs.

This has been a fun series, silly, yes, one that has had a lot of fun parodying RPGs and MMORPGs, but also parenting, helicopter moms, etc.

As to Mamako and sex….

Heh, don’t count on it. Think of her as a character who gets the perfect roll with the max points possible for a character. And while Mamako put in points for style, fashion, beauty and even sexy, she put every possible point that would have gone into sexuality into motherhood.

She thinks nothing of having nude meetings in the onsen with Masato…but also with the 3 female members of their party. What would actually happen in this situation? Mamko would misinterpret what needs to be done, would do something else instead, and would get double the amount of points, plus a unique skill up after it was over…with zero sex involved.

Yes, this series has ecchi, but that’s not what drives it, with some episodes having a fair bit, some a little bit, and some zero. But it’s a fun show, one I recommend.

and that’s where the doujin artists come in, to switch it from motherhood to good old rug burns ;D

All I saw was boobs and missionary work, it was like visiting the BYU campus.

People are actually calling this anime by Okaa-san online.

IU already posted a long discussion describing the series, and now having read the manga…

That’s not Mamako. The artist completely fails on her face and expressions (and probably made her tits too small in many scenes). Likewise her reactions are just not Mamako-ish.