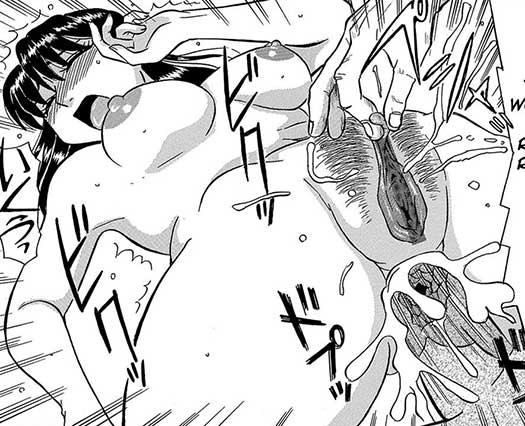 Well… okay. I clearly am not enthusiastic, but I can’t say I am disgusted either. It’s simply so average it’s uninteresting, I apologize if it’s sounding weird written like that or if that makes me look ungrateful to the scanlators who poured lots of work in this release

So. In Urete… Hoshii, housewives are dicked and love it, in short, one woman, one chapter. Most of the time these are mother and son chapters, but there’s also: a son in law, a foreign exchange student, the daugher’s childhood friend, the husband’s father, and a nephew.

) was the bottom of page 78, that was Alien-level.

See for yourselves, I guess? Thanks to Tkhang and Boosharwo for the release!

By the same artist, I also share Kaa-san Asa Made Daku Yo (171 pictures.)

Recompressed version incoming!
As of usual when ☑ the archive is quite big for its number of pictures, ☑ it offers a significant gain, ☑ the images are not in damn too high resolution, and ☑ I have enough time to do it, if it may help, I’m offering you a smaller version, in which I recompressed the images.
There should be no loss of quality for the naked eye, only a loss in megabytes.
The zip shrank from 112 MB to 51 MB.
Download links, Zip: Mirror #1 – or – Mirror #2 – or – Mirror #3 – or – Mirror #4

«Doutei Ochinchin Ni Katenakatta Kuro Gal (“The Black Gal Who Can’t Win Against The Virgin Dick”) [English], by Musenmai
Ushiro No Futa-Ko-san [English], by Behind Moon»

that image…good god he replaced HER WHOLE SPINE WITH HIS DICK!!!!!

seriously tough, i just couldnt get into that volume. While the art was allright in the first and second chapter, ch. 3 and onwards just went on full wtf. And lets not mention the stepfather and the american student, whose dicks should leave them dead the moment they get an erection, since clearly they account for 40+ percent of their whole body mass….

oh i know! one has only to have stumbled once on the truly bizarre stuff (vore, guro, Multiple penetrations via giant flying spaghetti monsters) to attest to that!

i still cant help but point out hilarious this was tough, since most chapters where using normal, garden variety humans, and then poof! Here comes Long Schlong Silver, Master of the Bootay!

I saw that picture. Holy crap! Is that even physically POSSIBLE?!? Medically speaking she would be torn literally in half from the inside out–okay?

I love the exaggerations, but I’m questioning science and human biology on this one.

Please and thank you.

Most of the dudes had cudgel dicks, they should’ve titled this Mother Clubbers.