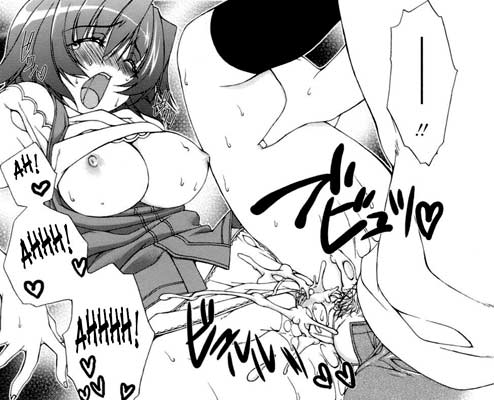 You better not have made crazy promises all around when you were younger, because if you happened to make one with a Japanese girl, she’ll come back when you’re an adult and have this promise come true, without asking you your opinion

For instance, if you ever promised stuff like “when we meet again, let’s do a parachute jump from an airplane”, or else you’re really, really fucked

Sweet^3 Room is based on this cheap scenaristic plot device, so – maybe it’s unfair that I’ll criticize it – I didn’t feel really “touched” despite the mangaka’s effort at making the story a bit emotional in the end. I essentially saw this as happy carefree fap’n’go sex with love. Three girls (the busty motherly onee-san always smiling, the mute middle-sister with feelings, the cheerful unpredictable pettanko), one boy, and that’s it. Enjoy !

Release credits are for Saha and Omega999, thank you very much !

By Sumeragi Kohaku, also known as LL Milk, I also share Nene + Nene and Let’s Do It. It’s strange, I would have thought I was sharing more volumes O_o