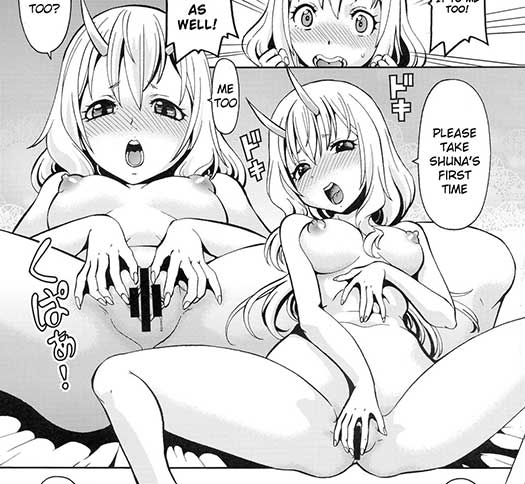 I don’t only have good things to tell of this doujinshi, but the hell, it’s drawn by one of the Old Masters, Itoyoko, it’s pleasant enough, it features characters from a series I love a LOT (Tensei Shitara Slime Datta Ken, read it at your favourite online manga reader, it’s worth it!!), so let’s share this story of how Rimuru got 2 female ogres, Shion and Shuna, to fall for his dick ^^

Still, I would detest to make you download something, and then regret you downloaded it, so, here are the warnings. The english is bad. More and more hornier. Mistakes in the names from one speech bubble to another. Torned. Examples took at random. And the art may be good, but it’s far from being god-tier, plus there are too many censorship bars to count.

Soooo… well, as always, it’s your call? But at least I’ll have given you the possibility, do whatever you want of it

END_OF_DOCUMENT_TOKEN_TO_BE_REPLACED

So, dear fellow hentaiers, here is a successful parody of Tensei Shitara Slime Datta Ken, one of the few isekai manga/novel series that does’t suck but is, on the contrary, simply awesome. Look, just read its wikipedia article or, much better, the manga online, I’m confident you won’t regret it

This doujinshi’s male MC is Rimuru, a slime who can take any appearance he wills (let’s skip the exact details, shall we, it’s a doujinshi ^^). Two of the village’s oni/ogre girls pay him a drunk night visit, Shion and Shuna.
And there we go, with tentacles and humanoid-body vaginal sex… followed by the most unexpected futa action in a very long time (a girl just grabbing the man’s cock for herself, and the man going along and turning himself female, can you picture it?!?

)… followed – sorry, deal with it – around the end by a page of bestiality in which Rimuru takes the appearance of Ranga, a huge wolf-like creature (fortunately, the mangaka had pity, and separated into different panels the bits where we see the face, and the bit where only the dick is seen).

I’ll give it to you, yeah, it’s weird. But when you know the original series, it’s pretty okay, so why not enjoy it? ^_^
We owe this good read to Samuel, Herreis, Tester and Vilis, from Hennojin, thanks a lot!

By the same artist, I also share Kimi No Naka Wa and Summer Wars Festival 1-2.